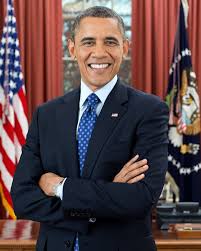 Barack Hussein Obama II is current and 44th president of United States. He is first African-American to the post. He was born in Honolulu, Hawaii on august 4th 1961. His father is Barrack Obama Sr of Kenyan origin and mother Ann Dunham of English ancestry. While studying at University of Hawaii they both met and got married.

Early life
In childhood Obama didn’t have a relationship with his father as his parents divorced when he was two. His mother married to an Indonesian Lolo Soetoro. Then their family moved to Jakarta, Indonesia. Due to some incidents there his mother sent back Obama to his maternal grandparents in Hawaii at the age of 10.

He enrolled in Punahou School in Honolulu, Hawaii from fifth until high school graduation. He attended Occidental college in Los Angeles, then he transferred to Columbia College, New York City there he graduated with BA in political science. He entered Harvard Law School in 1988 and he was an associate in law firm Sidley Austin. Next year he became an editor in Harvard Law Review journal. He graduated in law in 1991. He went to Chicago to practice as civil rights lawyer. He also taught law in University of Chicago as a lecturer.


Personal life
While graduating law he met with Michelle Robinson a young lawyer as she was an adviser to him in a law firm. They married on October 3rd 1992. They moved to Kenwood where they had two daughters Malia and Sasha.

Entry into politics
In 1995 he wrote an autobiography “Dreams from My Father: A Story of Race and Inheritance” which received great applause from critics as well as public, it was translated in to more than 25 languages. His work as advocate made him run for Illinois state senate seat he ran as Democrat for election and won in 1996. He was chairman of Senates Health committee. He ran for US Senate seat and won in 2004 with 70% vote a record for Illinois Senate seat.

You may like...
Virat Kohli - Standout Player of Indian Cricket Team

Virat Kohli is an Indian international cricketer and also right-arm me...

Subrahmanyan Chandrasekhar was an Indian-American astrophysicist who w...

Anil Kumble - One of the Greatest Indian Cricketer

Guru Nanak was the founder of the religion of Sikhism and the first of...

MS Dhoni is an Indian cricketer well known for his cool captaincy. He ...