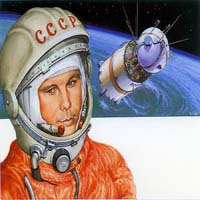 Russian astronaut Yuri Gagarin becomes the first person into outer space, when Vostok spacecraft completed an orbit of the Earth on April 1961 .
He travelled about 108 minutes in the spaceship .
He was awarded with many medals , including Hero of the Soviet Union , which was the nation's highest honour .
Gagarin was born in the Smolensk Oblast, Russia on 9 March 1934 . In his early ages he showed intrest on space and planets .
After completing his schooling, he entered into flight training (military) . Later he joined Soviet Air Force and becomes Senior Lieutenant .
In the year 1960 , he was choosen for "Soviet space program" , and later he got chance to travel in space .
In the year of 1968 he died in a jet crash .

You may like...
Neil Armstrong - First person walked on the Moon

Neil Armstrong was an American astronaut who walked first on the moon....

Maria Montessori was an Italian educator who developed the educational...